Writing’s not the difficult thing. Deciding what and how to write is the hard part.

Since November, we’ve been watching a tortuous process play out in my nation’s politics. Despite evident, rampant and blatant election fraud, the process is grinding on. It’s worse than tiresome, it’s tiresome by design, and that is why you haven’t seen a Vae Obscurum post in a while.

Engagement is a necessary duty of free people. Our Constitution was designed for a cognizant and engaged citizenry, by folk intensely interested in ideals that motivated them to produce our founding documents. The same valid faith that birthed this nation and defined and enumerated our rights as God-given is the reason His enemies hate us so much.

The political Left in this country and across the world, motivated as they are by the voice of a patron spirit who wants them dead, are now nothing more than golems driven by forces other than reason. There are no checks and balances in such mentalities, and this has been proven in some of the darkest chapters of human history.

Faith says such mindless and shocking third-world-style election fraud won’t withstand the scrutiny of free people. Despite what trials wait directly ahead of America, I cannot believe otherwise than that the last best hope of humankind will prevail again, as it has against equal challenges in the past.

One thing, at least, is certain. Those of us who survive will find out.

Still, there’s news. In a matter of only thirty-eight months since inception [laugh track] and nine months after releasing Boone’s latest, Ghosts of the Republic, we’ve produced Daniel Sean Ritter’s fifth title. Twenty-Four Hours to Midnight is now available where your e-books come alive, and his Big List of Links will be found at the bottom of this post. Despite everything, 2020 is officially a Two Novel Year.

24HTM’s 2003 chapters fill the gap in Ritter’s chronology between gaining General Peter McAllen’s patronage in The Yemeni Package (set in 1999) and my first novel, The Anvil of the Craftsman, which takes place in 2006. A dual-timeline structure also links his present day with his previous appearances in Boone’s File novels. The man is in fact the only character to appear in every title to date, and for good reason.

“Today is built on the past. Eight hundred enemy face him. A thousand civilians shelter behind him. The conflict was personal then, and nothing has changed.

Daniel Sean Ritter, operating in an environment where neither InterLynk nor an uncommitted United States government can help, seeks to safeguard his wife’s Iraqi family during an ISIS advance. There, he learns the enemy campaign is led by One Who Got Away during his Iraq War.

Haunted by memories of rare setbacks a decade ago but unwilling to again disengage from an unresolved contest, Ritter takes up arms with his stepson Gabir. With a handful of isolated local militia, a single honorable course of action remains: to do what they can, where they are, with what they have.”

It’s ironic and unplanned that 24HTM is set in this very time of year. If Die Hard is a Christmas movie (and it is), then this will be my Christmas novel. Celebrate with giving I say, and while you’re at it, feel free to grab a copy for yourself.

Sean’s File No.5, Twenty-Four Hours to Midnight, is available now though the following retailers:

Merry Christmas. Stay in the fight. Choose to love. -DA

A Garden in Russia

Boone’s fifth novel is now in full release. “Thank you” to the many fans, helpers, and readers whose enthusiasm also makes my catalog what it is.

Her latest begins moments after the conclusion of her fourth, Meat for the Lion, and largely concerns itself with the events surrounding the resulting constitutional crisis in the Russian Republic. Along the way, nearly all of my surviving characters—Boone, Terry Bradley, Daniel Sean Ritter, Thalia Kebauet, Deborah Vosse, Yael Levin, and Jon and Mary Anthony—either play a role or make an appearance, as do others old and new. Epic, excellent, and already described elsewhere as a work wherein “the emotions never stop,” I’m simply delighted with the result.

“Spring brings changes: for Boone, the joy of an expectant mother. Both the U.S. and the Russian Federation see tumultuous presidencies reach unexpected ends; in Moscow, the cause is death at the hands of an InterLynk associate.

Washington political operatives seek to shore up a legacy of failure in order to preserve their party’s viability. In Russia, a resurgent movement exploits political turmoil to propose governance in the style of the last century’s Cold War. To those ends, all pursue a family on the run in the Mediterranean: loved ones whose safety is critical to ensure an assassin’s testimony.

Thrust into an international, unavoidable contest of deadly professionals, Boone’s challenge is to summon her faith and overcome fears inhibiting decisive action. Justice, integrity of governance, and the narrative of history in two countries await the outcome. 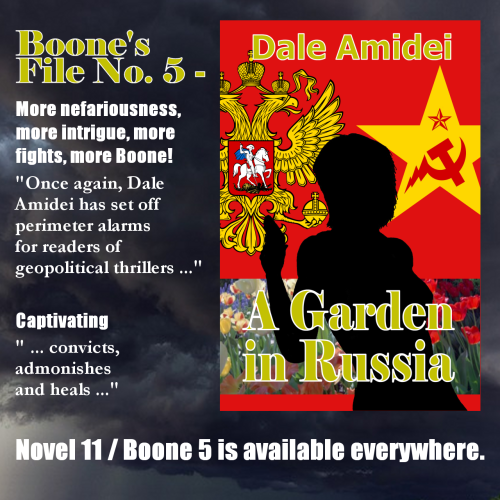